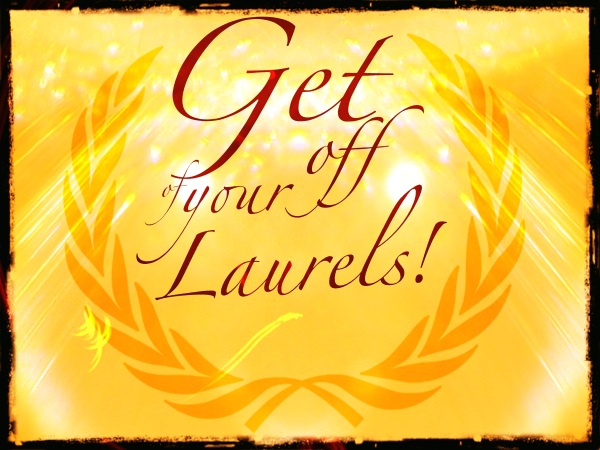 “Nothing wilts faster than laurels that have been rested upon.” –Percy Bysshe Shelly

The hero takes the stage as the crowd explodes into cheerful celebration.  After grueling torment and near defeat, the hero stands alone from the rest of the competition.  He has defeated his adversaries masterfully and now he is crowned with a laurel wreath on his head and the affections of the crowd.  He is their champion and hero.

But what happens to many champions after victories such as these?  What becomes of them?  Some continue to strive for excellence and gain victories again and again, while others stumble and fall upon their pride and face humiliating defeats later on.

Dare I say it is what happens after the victory that matter most!  In the Christian world we face temptations on all sides.  We experience real spiritual warfare for our souls.  Sometimes we go to revival meetings, camps, youth/adult conventions and we experience real victories by the Holy Spirit in our lives at the ‘High Places’.  These are mountain top experiences and we cherish these experiences for the rest of our lives.  They are milestone markers in our relationship to Christ.  These moments in actuality become sacred to us and rightly so because they were real tangible moments when we felt God’s presence in our lives.

But what happens when we come down from these mountaintops with our laurels of victory having done battle with sin and temptation?  Do we think those temptations and sins will simply disappear on our descent into the ‘real world’?  Can we ride that victory all the way to the gates of heaven?  Of course not!  The real battle is still ahead of us.  We have to enter our lives again fresh from victory and engage the enemy (sin) once again.  That doesn’t necessarily mean that we go into the world looking for sin, that’s not what I mean.  But in our attempt to live holy lives we will most certainly face sin again on the battle field.  When we come down from the mountaintop we must realize that Satan is waiting for us.  He doesn’t want us to succeed continually in our victories but would rather we face the cold realities of a world wrought with sin.

When we come down from a mountaintop experience, high with the Holy Spirit, we need to be mindful that we cannot rest on yesterday’s victories to get us through today or even tomorrow. The Apostle Paul wrote of his own struggles, and in his wisdom he said this: “Brothers, I do not consider myself yet to have taken hold of it. But one thing I do: Forgetting what is behind and straining toward what is ahead,  I press on toward the goal to win the prize for which God has called me heavenward in Christ Jesus.” Philippians 3:13-14 (NIV)

What Paul is saying here is that though he had won other victories at other mountaintop experiences he couldn’t rest his laurels on the past because the prize “heavenward in Christ Jesus” was still ahead of him.  He had to keep on going, and this is what we must do as well!

We cannot rest on our laurels from previous victories and expect to grow into holiness without engaging in our present battles as well.  I think there are two key words here to remember: “Pride” and “Press”.

The Apostle Paul understood the dangers of pride in his life and clearly says, “I am not there yet, my destination isn’t complete.”  C.S. Lewis once said,  When we allow pride to enter into our hearts (pride in what we’ve already accomplished, pride in our holiness, pride in our efforts) we, unknowingly take two steps backward.  We begin to compare ourselves with other Christians along this same journey instead of comparing our image with that of Christ’s.  Pride allows us to keep our laurels yet resting upon them will not propel us forward rather will create in us a stagnancy and therein lies the real danger of an atrophied soul!

Instead of pride leading to our spiritual demise, we ought to humbly press on toward our ultimate prize which is the very image of God within us – Imago dei.  Without this heavenward goal, which is holding captive our thoughts, actions and speech, we can become so much like the world around us that we blend in completely and are no longer ‘set apart’.  We must press on from victory to victory…keep on keeping on.  We don’t have time to hang our laurels.  We don’t have time to rest and admire them, but we journey on because we haven’t reached our destination yet.

Let me ask:
Are you resting on your laurels of past mountaintop victories?  If so, it is time to set them aside as glorious as they were and press on.  Our ultimate victory is assured in Christ if we are faithful to Him.  Our goal to be like Him and in so doing we shine before the world so that His redemption is visible to all.  Eternity is our reward as we press on towards our goal!