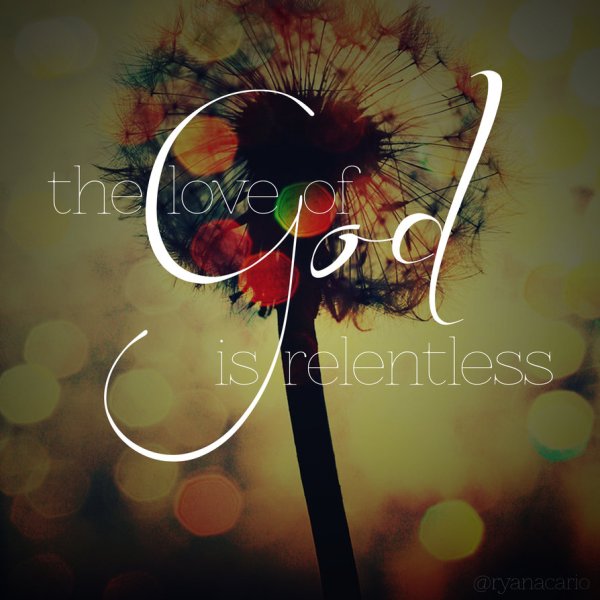 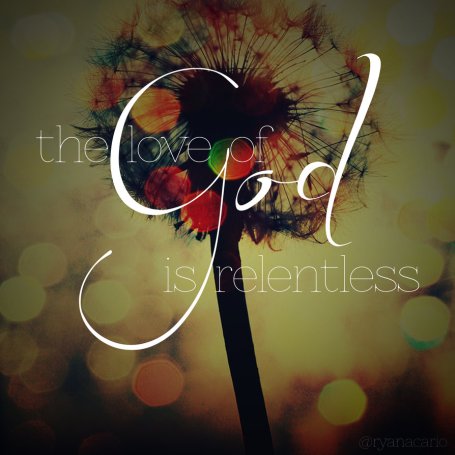 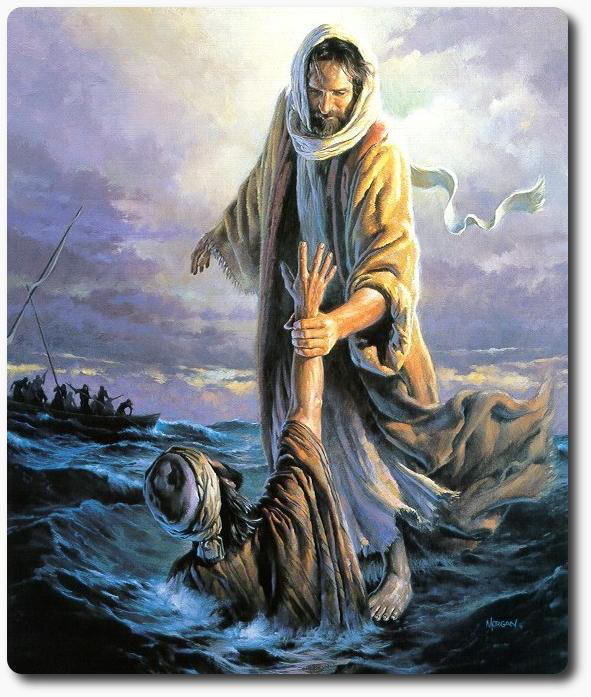 I’ve been looking at the painting.  I’m mesmerized by it.  Have you ever studied a painting?  Have you looked closely at the details?  The brush strokes?  The unspoken drama captured in a mere moment?  Look at the waves, how they list back and forth, how they swell to a crescendo and fall back down again.  It’s almost as if you can watch them in their lunar symphonic dance.  As I look into this painting I see so much of me.  I see evidence of my doubt, evidence of my fears and evidence of my lack of strength.  I see me drowning there, not just Peter.  I see what could happen if I fall down into the depths of this flowing tide.  The water filling up my lungs.  The panicked shock becoming reality.  My feeble life flashing before my eyes.  I can imagine it…can you?

As I look at this painting, a story we’ve all heard before while sitting in those stiff backed, wood-oil scented pews that creak when you shift positions…the story of Peter walking on the water with Jesus.  We’ve heard the details of this story.  How Peter saw Jesus walking towards them and cried out to Him, “Lord if it is really you call me to come out there with you…and Jesus said ‘Come'” (Matthew 14:22-33).   So Peter gets out of the boat and starts walking towards Jesus on the water.  You see we often stop here in this story and think to ourselves “wait for the ‘but'” and we call this Peter’s doubting moment because he looked down, because he became frightened, because he took his eyes off of Jesus.  But what we often fail to look at within this story and it’s evident in this painting is that Peter got out of the boat…but where were the rest of the disciples?  Where did they remain?  In the boat.  If we look real closely they are way off in the foreground standing in the boat safe and sound but did they believe as Peter had?  Did they climb out of the boat with him?  No.

Another thing that really hits home to me that is portrayed in this painting is the juxtaposition of his friends and peers in the boat as opposed to where Peter is located.  No, not just because of their doubt but because of their distance.  When Peter needed his friends and his peers the most they were too far away to help him.  He was well out of their reach to throw any kind of life saving device towards his sinking soul.  As I stare into this painting I begin to understand something that I didn’t before.  Perhaps I knew it to be true, but only in the back of my mind.  Here’s the truth:  Our friends, comrades in arms, loved ones and peers cannot save us all of the time.  There are times when faith takes us out further than perhaps others are willing or called to go.  Faith takes us into deeper waters where we have to find out for ourselves that not only is our strength not enough but our faith must be increased so that Jesus can save us.  It’s not about being better than our friends or our loved ones, it’s not about being more holy but God calls each of us to different waters.  So when we step out of our boats as Peter did we will find ourselves at times to be all alone on those waters without the support of other believers near us.

Staring again at this painting I am struck by how the painter illustrates the expression that Jesus has on his face.  If someone lets you down what might your expression be? One of disappointment?  One of anger?  One of dismay?  To me, Jesus doesn’t seem to have any of these expressions on His face.  Instead He appears concerned, lovely so as He stoops down to pluck Peter from the depths.  Notice too that Jesus doesn’t grasp onto Peter’s slipper, wet fingers.  Instead He grasps Peter by the wrist.  What this says to me is that Jesus knows.  He knows that Peter can’t pull himself up out of these circumstances.  He knows that Peter’s strength have given way to doubt, shock and fear.  Jesus knows and so He pulls Peter up by his wrist and in so saying ‘My strength is enough, let me be your salvation’.

I am Peter in the waters from time to time.  I am being choked by the lapping waters as I gasp for another breath.  I am given over to fears and doubts and I cannot save myself.  I look for my friends and for my peers but they are too far from me.  Yet Jesus is there willing and able to rescue me…again.  He grasps onto my wrist and says to me ‘My love, my strength, my courage, my grace, my hope…is enough!’

Today I don’t know what kind of waters you’re walking on in faith, but I do know one thing Jesus is there!  Though our faith may take us out deeper than we’ve ever gone before, though we find it difficult or impossible to walk alone…Jesus is there!  Trust Him today!  Trust His strength.  Trust that He will never abandon you or be too far away to rescue you.  When you find yourself far from the saving mercies of other Christians, look up and find the One who has paid it all grasping onto your wrist and saving you through His strength and grace.

My children got sucked in today by an old black and white television show. The show in question? The Twilight Zone. This morning before going to school, waking up with sleep caked eyes they flipped on the TV and they were drawn in. Not by expensive special effects or famous actors, but a well scripted haunting scenario. My kids journeyed with the characters on the episode identified with the actors as they uncovered a truth so hard to accept…they weren’t on Earth at all…they were someplace else.

To some degree the disciples had to have felt like actors on horrifying episode of the twilight zone. They had just finished their meal and went for a walk with Jesus in the garden of Gethsemane. Imagine their tired eyes, filled stomachs and then Jesus tells them to sit at a place in the garden while He went up just a little further to pray. The effects of good food and the tranquil setting must have taken effect because the gospel of Mark records that Peter, James and John fell asleep instead of the Lord’s command of “keep watch”. They fall asleep, and sleep soundly as Jesus prays earnestly for His Father in Heaven to take the cup from Him (v36). Jesus displays his humanity in this moment, because He understood what needed to take place and His very human nature pleads for it to not take place.

Three times, Jesus comes to them and three times He finds them sleeping on the job. Jesus, in this difficult moment, tells them that they have to stand guard so that they didn’t fall into temptation because the spirit is willing, but the body is weak. (v.38) But because of their deep exhaustion they can’t keep their eyes open. In Jesus’ toughest struggle in his human existence, even beyond his temptation in the wilderness, His hand selected disciples couldn’t support Him in this trial. They fell asleep three times…I don’t believe in numerology but this repetitive notion of three is evident in the crucifixion story. Peter denies Jesus three times, the rooster crowed three times, the disciples including Peter, fell asleep three times and three times Jesus has to wake them up. Jesus in His death and resurrection took the span of three days. Post resurrected Jesus asks Peter how much He loved Him…you guessed it three times.

After Jesus finishes His prayer conversation with the Father, He awakens His disciples for the last time and says, “Rise! Let us go! Here comes my betrayers!”(v.42) Here is when their reality is turned upside down. Within this very moment an alternative reality seems to present itself and it strikes literal fear in the disciples. One of their own, Judas enters the scene, and as a sign of identification places a kiss on the cheek of Jesus, as if to say ‘this is the one you want’. Peter’s eyes grow wide in surprise, as does James and John’s. How can this be? Why would Judas do such a thing? He was our brother! They all feel the bottom drop out in their stomach as this new reality sinks in. Peter reaches for his sword…where he got it, the Bible doesn’t say, but he uses it poorly it would seem as he slices off the ear of a servant to the high priest. I don’t think Peter planned to use it, his strike wasn’t premeditated but reactionary instead. This twilight zone will lead to an illegal midnight trial.

One can almost imagine the screen flickering in black and white as the camera zooms in on the actor and an expression of sheer disbelief and horror is magnified as the scenario is unveiled for the first time. This Maundy Thursday ended seemingly in a different dimension for the disciples. Way too much drama, too much loss, too little strength to do anything but sleep, cut off an ear and run away.

Don’t be too quick to judge though, perhaps if we were to place our feet into the disciples’ sandals for a moment without the foreknowledge that we have as we view this story from the outside, would we really have done anything different? Probably not.