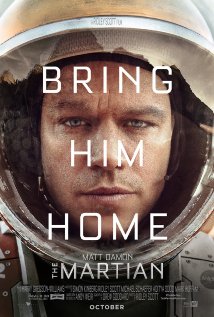 This past week, I had the opportunity to see “The Martian” with my wife and a group of friends.
Here is a Pastorsponderings Movie review of this film:

I remember hearing Andy Weir on Adam Savage’s (Yes, that crazy hyperactive ginger  from Mythbusters) Still Untitled Adam Savage Project podcasts.  Andy is a science geek, and he has this insatiable, inquisitive nature about all things science and space exploration.  His book “the Martian” was actually self-published after he had blogged it chapter by chapter.  Often times, others would offer suggestions and/or check his math within specific components of astrophysics and other complex formulas.  His process, to me, was astounding and although there is an element of fiction within his “fiction novel” the science is already available for such an amazing feat of humanity ingenuity. 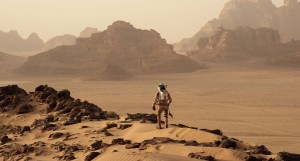 Matt Damon plays the lead character astronaut – Mark Watney who is accidentally left for dead on Mars following a horrible storm.  His crew believes he was swept away and killed,  so they make a rapid launch and plot the long course for earth.   The only problem?  Watney is of course not dead, he is alive and now marooned on an inhospitable planet with only a NASA designed artificial habitat pod to survive in.   “Will he survive?”  This was the question that I was asking myself over and over again during the film.  It truly was “edge of your seat” with many tense scenarios where almost everything that could go wrong – did go wrong.

I really enjoyed this movie!  Damon does a great job making Watney come to life in a very authentic and organic way.  The science behind the plot makes it plausible and is not too far fetched to be unbelievable.  I loved the conflict that the leaders of NASA had to weigh – do they tell the public that Watney is alive or do they maintain the story of a lost hero and space explorer?

A few parental suggestions –
There is some language in the movie and one naked butt scene, so parents be mindful of this adult content.

My Recommendation –
I found Ridley Scott’s depiction of Mars to be mind blowing and visually pleasing – I thought to myself while watching , “this is what I think of when I think of Mars and its crazy violent red surface!”  Everything seemed to be was captured so well on film for us to all imagine what it would be like to be stranded on a violent uninviting rock such as Mars.  I loved the survival story of Watney, I wont tell you if he survives or not, you’ll have to see it for yourself to find out!  It truly is like, as writer Andy Weir describes it,  Apollo 13 collides with Cast Away.  My recommendation to you – go see it for yourself, experience the edge of your seat, nail biting intensity that is the Martian!

As A Christian –
I watched this movie and was able to marvel at the ingenious complexity of God’s creation of the Universe! Watney (Damon’s character) even prays out loud to God in a moment of utter frustration and hopelessness.  The Martian is an existential tale that brings life and death, the fight to survive, hope vs hopelessness all back into focus.  I was also reminded of just how creative we humans were created to be, especially in times of crisis and survival as depicted in The Martian.

I give the Martian –

check it out for yourself and tell us what YOU think!