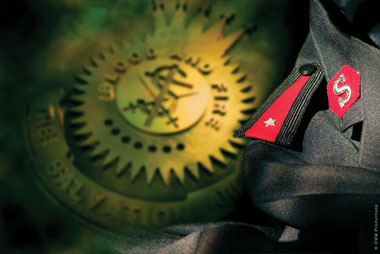 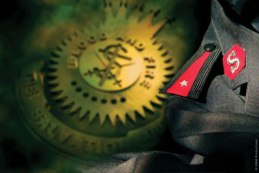 Some officers have struggled with this.  Some officers haven’t.  I have heard some argue about the lifetime calling while others argue the calling ‘for a season’.  I would like to outline both arguments in this article.  My purpose for this? To help clarify, not further muddy the waters.  To shed light on both contentions and for the reader to draw their own conclusion.

So what is the calling of The Salvation Army officer?  Do we deem it sacred?  Is this calling infallible?  Or do people make mistakes from time to time? 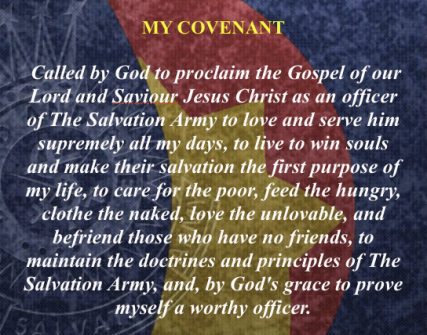 What is a Covenant?

In the Bible covenants were made by God to people.  They were also made by people to God.  And lastly covenants could also be made from one person to another.  A covenant is simply a promise or an agreement, something that could be deemed as binding.

So when one enters into a covenant with God this person is making a promise to do or abstain from something.  With the definition of covenant being given, let’s now explore the two main arguments that are prevalent in our Army today. 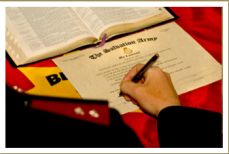 The Covenant  an Officer makes to God is for life!

I have heard it said that within this calling, a Salvation Army Officer enters this covenant which is sacred.  What makes it sacred?  Certainly not a simple piece of paper with writing printed upon its surface?  Of course not!  There is, at the end of an Officer’s time at training college, a time of commitment made to God before their peers, the training staff and sometimes the territorial commander.  When the soon to be newly commissioned officer sign this covenant page, they are declaring and affirming their calling to serve the Lord in the capacity of Officership.  What is said about this signing by many, if not most, within leadership that it is a solemn declaration that is for a lifetime.

The argument has sometimes been taken to mean that should an Officer resign later on they have broken their covenant with God.  I have heard stories of Officers who have left the work that were told that they had sinned against God for leaving the work and breaking their ‘Officer’s Covenant’.  The Argument seems valid, yet could be construed as far too legalistic in nature.  Who are we as fallible people to claim that another person has turned their backs on God?

There is a need for accountability and a standard to uphold, however this argument presents a challenge in that how do we uphold this perspective as individuals?  In the legal sense should the terms we use be more clear?  legally speaking what does ‘all my days’ mean?  Is it ‘all my days’ that I’m an Officer?  Or are we to take it to mean ‘all my days’ of life that God has allotted me?

I know this sounds superficial but some could interpret this Officers covenant to mean one of two things.  So is this Covenant we sign for a lifetime or for a season?

Which brings me to the second argument:

The Covenant  an Officer makes to God is for a season!

Some would express that within the Officer Covenant there is adequate enough verbiage to  interpret what we sign as a calling ‘for a time.’  This isn’t generally how most view the covenant, however this is a part of argument #2 and its justification.

Do we truly sign our lives away so to speak and in an instant we no longer have independence in terms of where we will stay and where we will go?  Obviously when one becomes an Officer it isn’t because we are hugely overpaid, nor because we feel inclined to become stylishly dressed in uniform.  It is because we wish to serve the Lord and serve others through the means of Officership within the structure of The Army.

But does this necessarily mean that it is for life?  Obviously Officers don’t view it as some sort of prison sentence and we plod on serving 20 to Life.  But what happens should God call one who is an Officer to something else?  Have they broken their Covenant with God or has God simply used the means of man to adjust that covenant into a newer and different territory?

Furthermore we shouldn’t presume that the workings of man are necessarily the working or the will of God in every instance.  For in our holiness tradition we are taught that through the continued promptings of the Holy Spirit we look less and less like our old sinful self (old has gone, new has come) and more and more the image of Christ.  In so doing we mature in our faith, could it be that in this maturity some have felt compelled to take a greater leap outside of the Army?  I’m not arguing for all who have left, but some appear to have taken this leap.

Lastly on this argument looking back at the context of our Founders, William Booth specifically was quite militant in his view of Officership.  Even his own children who had served within its ranks for a time then leaving were considered ‘deserters’ to the cause.  This paints for many this notion that William Booth propelled and enforced our understanding of this Officers Covenant.

One wonders where grace falls within the Army at times.  When some leaders, a minority mind you, have condemned those who have left the work as traitors and sinners.   Grace rises above such lowly expressions.  We too ought to reflect and pray on how we minister to one another within this army.  How we treat one another, while at the same time reminding each other to live holy lives and continued prayer and devotion.

We are in the business of saving souls, but the saving of souls isn’t done solely by uniforms and ranks and officials…it is done first and foremost by the blood of Christ and secondly the workings of the Holy Spirit.  May we ever be diligent in this fight that we do not ostracize those who have, for whatever reason personal or otherwise, left this calling of Officership.  That we continue to live worthy lives before God first and foremost and that we live within that grace instead of condemnation and militant rules and stiff regulations.

Standards are important, leadership is vital, but grace is often the shepherd loving the sheep and gently and allowing growth to take place out of love instead of might and fist.

One thought on “Officership: A Calling For a Lifetime?”