Here are a few things parents should avoid saying to our kids:

I’ve said this phrase, I was busy doing work and barely looked up at my child who was holding up a picture that they had drawn.  They wanted to show me and I was so consumed with what I was doing that I uttered this phrase.  When I realized what I had done I hugged my child and apologized.  When we utter a phrase such as this what many children hear isn’t that we don’t have time right now but rather we don’t have time for them.  It’s most likely unintentional and yes we all work and are busy, but be careful how you share your busy-ness with your child.  Don’t utter something like this with frustrated exhalations don’t let them think that they are less important than the work you do.  Your kids and your spouse are your first priorities after God. 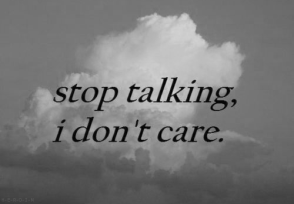 This goes in step with the last one, but be mindful of how you express your frustrations with your children.  When conversations or actions get out of hand parents, we can’t stoop to the child’s level and tell them like a friend “I don’t care!”  We might do that with our words and even with our non-verbal communication of body language.  Be careful how you express yourself and in how you conduct your body language.  Your child needs your support in this world that seems to care less and less for the individual.  You have to be a source of hope, love and acceptance with your children.  Try not to utter “I don’t care” if at all possible, because in all likelihood you really do care so tell them that.

This is a banned word in our household.  It’s obviously impolite to say to one another and with it there is a sense that what a person says doesn’t matter.  In the heat of an argument or a disagreement be mindful that words can hurt.  ‘Shut up’ is one of those words.  Parents, I know we want to hear from our children…and then there are times that we wished our children would be quiet.  Select better words to say to rear your children other than ‘shut up’.   It is not only rude but it carries with it a hostile approach which can be taken to mean what you have to say even outside of this argument is less important than what I have to say.  We may feel that way in the heat of the moment, but we want to give value to our children don’t we?  We want them to know that as they grow and mature what they have to say is important.

You may not even know you’ve said this phrase.  In fact you may not have said it in so many words, yet your child has interpreted what you have said to mean ‘I hate you!‘ In the heat of anger you may say things like “I am extremely disappointed in you” or “How could you do such a thing“, or “I can’t even talk to you right now“.  Kids sometimes misinterpret our anger and what we are saying to mean that they are despised and hated.  Make sure you measure your disappointment and your anger with them.  Let them know that what you are disappointed in are poor choices not your child.  Help them understand that they are loved.  Don’t for a moment allow them to think that you hate them.  I know we as parents we don’t obviously hate our children but sometimes in the way that we act or conduct ourselves our children can interpret it to mean that they are hated.

Every child is unique and different.  If you have more than one child it may be very tempting to compare them with one another…don’t do it!  If every child is unique and different why in the world would you want your other children to become the same?  We get frustrated with our kids, I know that to be true.  Yet don’t let them think that you favor one over another.  Don’t ask them “why can’t you be like your brother or sister?”  What can happen is that the child you are talking to can become convinced that their identity is wrong or they begin to question if they are good enough.  Young children even up to teenagers are still unsure of who they are.  When we compare them we are in a way validating in them that their identity is in some way wrong.  God made your child very uniquely, yes discipline them but don’t compare them.  Make sure they feel your love and acceptance and help them to craft their God given identities into adulthood.

What am I saying?

Love your kids.  Hug em.  Don’t miss opportunities to teach them because you’re busy.  Make sure your body language and your attitudes aren’t in conflict with what your mouth is saying.  You have children who are like mold-able clay you can either help them become a beautiful vessel that God can use or you can dismiss them and let the world mold them.  Be the best parent you can be and be mindful of what you say to your children.  Also let them know that you’re not super parent, and you do make mistakes.  Own up to those mistakes so that they can also see how to act and respond in maturity to missteps and mistakes of their own.  Parenting isn’t easy, we will suck at it from time to time, but be encouraged we can do this!

One thought on “What Parents ARE saying to their kids, but shouldn’t”