Do you know the phrase “They fought the good fight”? I think it quite fitting when I bring to mind my Mom and Dad, Colonel’s Dennis and Sharon Strissel in the context of their 46+ Years (Missionary Service included) of Salvation Army Officership. I might be partial but I am blessed more than you can know to have been raise by these loving, godly parents of mine!

The Chronology Of Faithful Service:

Commissioned – 1974
The “Followers of Christ” Session.

An Officer’s Kid Perspective:
Growing up as Officer’s children my sister and I didn’t see some of the hardships my parents both faced. The life of an officer, let alone a missionary officer, is not easy. Yet my folks always intentionally created an atmosphere of peace and love at home despite any outside issues or difficulties they might have been going through in their appointment. They modeled for Sherry and I how families should function within Army ministry. It was a holistic approach before we got all “fancy” with terminologies within the workings of ministry. My parents have devoted their whole hearts and lives in the service of Christ the King first and secondly within The Salvation Army.

Another aspect of their officership was their connection with people that they ministered to. I always joked that my parents knew EVERYONE in the army world because inevitably at large Army functions they would always be engaged in conversation with many many different people from the vastness of the army world. They truly love people and it is a reciprocated response by others in regards to my parents. I recall countless visitations to corps families’ homes in which the conversation went on FOR HOURS…as a child it was torturous, but as I got older the more I realized that in these moments a sweet fellowship had been taking place. My parents know how to engage and how to minister to the hearts of people, of this I am confident of…they love people regardless of background, regardless of station or position. My Mom and Dad understand the necessity for fellowship and love.

Leadership & Personal Reflection:
I might be partial but I am proud of both of my parents and that of their leadership within this Army. They not only dedicated their lives to the work of The Army but they led with integrity and grace. Many consider my father to be tough character and I am not challenging that by any means – He will always let you know where he stands and how he feels. He doesn’t hide his convictions nor, to my knowledge, has he ever wavered in a decision. Sometimes, perhaps he could be intimidating to some but within Him has always been a tender heart for anyone who has been slighted, wronged or oppressed. I have heard it countless times from my father these words – “I do not like bullies” and He, on many occasions stood up to bullies in communities, in corps, even in leadership…I don’t think I have embarrassed him in saying this, it is simply as it should be. Thank you Dad for teaching me to be a voice of reason and a voice to those who have no voice and to fight for those who are weak or slighted by society and certain cast systems in our world. To me, Dad, you are constantly displaying godly leadership and Christ-like integrity. You also taught me how to preach with passion, conviction and eloquence. I remember how diligent you would be in your pastoral studies and in crafting your sermons. How painstakingly assiduous you were (and still are) in producing your sermon manuscripts. You have taught me the value of studying God’s Words and that of relevant life application through your messages. You have made me want to be like you in every way when it relates to preaching God’s mighty word.

My mother, though quiet at times, is quite similar in her leadership style. She is articulate, very intelligent and speaks with similar authority. I have known my mother to read entire books in a matter of a day. She is more of an introvert than my father yet she will always make time for you and to encourage you. I can recall many a phone call from her to do just that as I faced my own days of discouragement. She has always led with conviction and has kept the banner and standard high in her ministry. Though it isn’t evident to many, Sharon Strissel is a rock in our family. She has, in the hardest of circumstances, pulled our family through. I recall Mom making up recipes on the fly in the kitchen on the tiny Island of St. Helena as we ate yet another meal consisting of fish (probably mackerel)…to this day I am still very picky about eating fish. That is just one prime example that sticks out in my mind…but there are so many more episodes of her resolve and strength. To me, Mom, you have been a source of encouragement, hope and love and we are all so much better because of it! As a side note, I remember your messages vividly. I know God has used you in mighty ways as you have spoken around the world. I remember as a child being excited during Salvation Meetings when you would be speaking because I knew your messages would be a lot shorter than that of Dad’s…but they were always on target for those you ministered to. 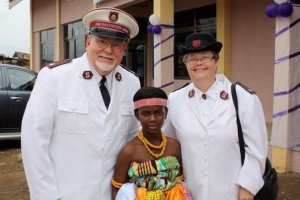 Allow me to take the liberty of saying “Well Done” Colonel’s Dennis and Sharon Strissel!
I am so proud of you both and I know that you have truly exemplified Christ within your service to The Salvation Army.