Recently in our corps something happened.
No, it wasn’t another rousing chorus of “O Boundless Salvation”.  It wasn’t another meal around the table, although those are rather nice.
Instead, there in the sanctuary of our corps, in the place where lives are changed and hearts transformed by the power of the Holy Spirit, in that very room…something was damaged – The Mercy Seat.

It happened because some corps kids were playing through out the building…scratch that.  It happened because not “some” kids, but MY kids happened to be playing in the corps building (Why is it always the Officer’s Kids?  Really??).   They ended up in the sanctuary.  Perhaps the lure of the microphones and musical instruments were too much.  Regardless of how they ended up there, they were there.  In the process of scaling the mercy seat, my eldest’s foot got caught on the lip of the seat and tripped.  As he tripped, the mercy seat came with him.  He tipped it over completely, and with it the top was pried off.

Upon inspection of the mercy seat, I quickly realized that it was not going to go back together without a little help from a hammer and some new nails.  Currently, repairs are underway.

It dawned on me last night while laying in bed, and it all began with a broken mercy seat.  Perhaps in our corps we have lost what the mercy seat used to represent.  Perhaps, it is broken today and in need of repairs.

Question: Is your mercy seat broken?
I don’t mean physically, but emotionally, tangibly, spiritually, is it still intact?
Does your corps still call people to penitence, repentance and reconciliation?
Or have we gotten away from holding each other accountable for fear of offending others?  I don’t mean “accountability” in the sense of judgmental attitudes and condescending “I’m better than you” behavior, I mean is that standard and call to the mercy seat still available to all who would seek it?  Is there an invitation to it? 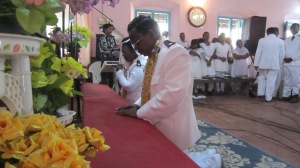 My Fear:
I fear that we as an Army have gotten away from it in some places.  If your corps still introduces people to Christ through the mercy seat, I applaud you.  The mercy seat in and of itself isn’t magical.  It isn’t really even about how nice it looks or how old it might be in your building.  What matters is the emphasis of repentance, reconciliation, and holiness.  The mercy seat could represent more than just that piece of furniture in our chapels…but do we emphasize it anymore?  There are times when I wonder if, in the next ten years, will it still be a part of our Army’s identity?  Will we have discarded it as some ancient Army relic of times gone by?

Is your Mercy Seat Broken? 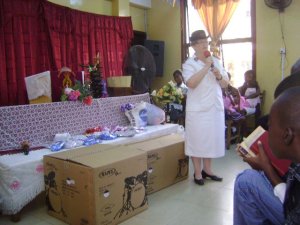 Perhaps it has gathered dust from lack of use.
Perhaps it needs some revitalization and fixing today.
Perhaps, in order to revive this Army, we ought to seek it out…but more importantly we ought to seek out the power behind our faith.

I believe the Holy Spirit isn’t finished with us yet.
I believe that He longs for us to linger upon that mercy seat as we reconcile ourselves to Him once more.
I believe that in order for us to possibly regain our passion and fire for the world, we have to go back to it and start once more upon our knees.

I fear that if we do not repair these broken mercy seats, our Army will soon follow that same fate as well.

-Something more for our Army world to ponder today.
To God be The Glory!

32 thoughts on “Dear Salvation Army, Is Your Mercy Seat Broken?”