It might seem like an open and shut question to you, but it is certainly more complicated than that.

Scripture does not condemn the consumption of alcohol, many times it calls for the drinking of wine in celebration and as medicine (for Timothy – 1 Timothy 5:23).  Of course, there is the warning of drinking too much wine –  ‘Do not get drunk on wine, which leads to debauchery. Instead, be filled with the Spirit…”(Ephesians 5:18).  Even the disciples and Jesus drank wine.   Some will contest that the wine of Jesus’ day was not very potent when it came to its alcohol content…but it still contained alcohol.

Some might contest that the position statement of The Salvation Army on alcohol is not necessarily based on Scripture, but rather societal experience:

It should also be noted that many other denominations have a similar view on alcohol and their church members.

Some might then ask the question “Why not alcohol?”
What harm could it do?
Perhaps it opens the door…
Perhaps it makes one vulnerable…

Sometimes I wonder why we don’t talk much about the use of Alcohol?

History:
The Booths, upon founding the Christian Mission, and subsequently The Salvation Army, witnessed the effects of alcohol on society, especially the poor.  Children were literally stumbling out of bars drunk.  It was a blight on the east end of London.
How could one stand by and witness a whole generation of people ruining their lives by drink?  Thus, one of the pillars of soup, soap, salvation was teetotaling discipline.

The Present:
I serve in a corps that is surrounded by drunks.

Just across the street is a closed liquor store, and in front of it an even bigger now OPEN liquor store.  There is nothing innately wrong with that liquor store.  That store owner works hard to support his family.  BUT what is wrong is that this store is located in one of the poorest neighborhoods in our community – right across from The Salvation Army.  On the other side of our corps, kitty-corner to us, is a Bar… 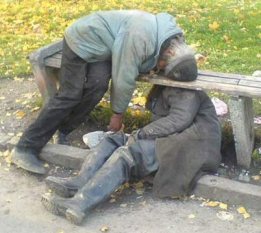 We witness the habitual effects of alcoholism in our very parking lot, when we have to pick up a drunkard (almost daily) and escort him/her to a detox location.  It is disheartening to see the utter waste of human life devoured by the bottle.  It is very sad to see families ripped apart because of abuse brought on by intoxication and poverty due to the supporting of a habit.

There is nothing wrong with alcohol, but there IS something broken with people, and there is a genetic disposition to addictions…

Drinking is not a sin, although we as The Salvation Army certainly treat it that way…mainly because we receive many who have lost it all because of the affects of alcoholism.  That liquor establishment across the street near my corps, is not illegal or wrong, but the affects it has had upon the poor in our neighborhood certainly does not make it right either.  Our city will benefit from those tax revenues, but we unfortunately must meet human need in the streets that are bent and broken by it.

My family, a few generations ago, struggled with alcoholism…
My wife’s family has history of alcoholism in it…

So…
why not alcohol?
You tell me.
Tell us what YOU think as we explore this topic today.

17 thoughts on “Dear Salvation Army, Why Not Alcohol?”