The movie 300 is about to get a sequel.  According to IMDb 300 ‘Rise Of An Empire’ will hit theaters in 2014.  Like its predecessor this new installment will undoubtedly be a total macho movie with frequent action sequences and lots of blood and gore.  But before anyone ever yelled out “For Sparta” another army of just 300 soldiers fought insurmountable odds and completely decimated their enemy.  Although the Bible doesn’t specifically say how many Midianites Gideon and his band of 300 hundred defeated, they had to have numbered in the hundreds of thousands.

Gideon’s name means ‘Destroyer’ or ‘Mighty Warrior’, and yet the first time we encounter Gideon in the Bible he is threshing wheat in hiding so that the Midianites don’t find him.  Our first impression of this ‘Mighty Warrior’ isn’t exactly encouraging.  Yet an Angel of the Lord comes and pays Gideon a visit, and uses his name’s meaning by saying, ‘Mighty Warrior’ the Lord God is with you!  Gideon isn’t exactly full of confidence and even challenges the Angel’s announcement by essentially saying, ‘how can God be with us when we are being oppressed?’  Still the Angel is unfazed by Gideon’s doubt and commands him to go with the strength that he has and save Israel from the clutches of the Midianites.

If doubt and shock wasn’t enough, Gideon’s next statement puts things into perspective, he says; “how can I save Israel? My clan is the weakest…and I’m the least in my family?” Has Gideon lived up to his name ‘Might Warrior’ yet?  No, he hasn’t, in fact far from it.  But can you blame the guy?  He has seen the devastation caused by Israel’s enemy and he also recognizes that his family is the smallest and weakest in all of Israel.  Why would God possibly choose him?  Fast forward nearly a hundred and fifty years later and God appoints another ‘least of these’ to be King of Israel, a guy by the name of David.

I think God’s plan for Gideon and even David had less to do with human might and more to do with His awesome power!

Gideon had a tough time believing that he was indeed called by God.  He even tested God numerous times just to be sure, and finally after Gideon had his requests met by God, He puts together an army that’s boasted 22,000 soldiers.  Wow, what a force of might by Israel!  But that wasn’t how the Lord planned to defeat their enemies.  Gideon’s forces are dwindled down to 10,000…but that was still too many soldiers for what God had in mind.  Finally after one more soldier ‘thinning’ episode at the banks of a body of water only 300 soldiers remained.   This battle wasn’t ‘for Sparta’ either, this was for the Lord! 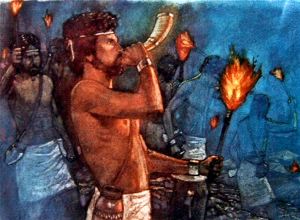 I don’t know about you but that math just doesn’t seem to add up.  How could an army of only three hundred ever defeat the vast and ferocious forces of the Midianites?   Enter God’s power, might and perfect battle plan.  He gives Gideon the battle plan and it’s unorthodox yet totally effective.  Isn’t that how God seems to work?  He uses the least of these for His purposes and when the battle is won there could be no doubt who it was that provided the victory!   So it was with Gideon and his army of 300.  Against all odds and an unorthodox battle plan, God brought a mighty army to its knees in defeat!

Still to this day, God can use us, the ‘least of these’ to win mighty victories in this world!  Our God can lead us against all odds and bring mighty foes to their knees.  Sometimes we may have doubts like Gideon did and faith just doesn’t come easy, but we serve a God who always keeps His promises and He will be there for us in the midst of our toughest battles.  Trust Him, He won’t let us down, and He calls us ‘Mighty Warrior’ even when we feel much less than mighty.