I love music.  I love to sing and play music.  It’s a real passion of mine.  Frequently I will have a lyric or two in my head throughout the day.  Recently a conversation was struck up on one of those social networks about this very topic.  It quickly centered on funny lyrics within songs.  Most of the time these lyrics were written long ago or even recently and the implication or meaning has either been lost or was simply written into a song without much thought.

The truth is though that when we sing these songs sometimes we just accept them for what they are but do we consider what perhaps new comers might think or interpret these songs to be?

In the very same song by David Crowder he penned these words, which were later edited:

‘And heaven meets earth like a sloppy wet kiss.’ Ha!  The first time I read that I had to laugh out loud!  Did he really write that?  Now I know what he was trying to say and I’m not criticizing him for it, he’s done some amazing worship songs.  But I do often wonder what new comers think about these lyrics.

Here are a couple of others:

Song: Come Thou Fount – “Here I raise my Ebeneezer”  most don’t know what that is and some like me think of ‘A Christmas Carol’ by Charles Dickens when we sing that second verse.

Song: My Jesus I love Thee – “And say when the death dew lies cold on my brow” …more like death eww…Not sure I’d be able to sing that with a straight face, however I do know that this was a poem before it was a song.

Song: Word of God Speak – “…and the funny thing is, it’s okay!”  Is it really funny?  Is it really okay?  I don’t know it just seems like a silly line to me.

I know there are other songs out there…and if you know more please share.

Then there are the other misunderstood church hymn lyrics, for example:

“Bringing in the Sheets (Sheaves)”

Amazing Grace: “That saves a wrench (wretch) like me.”

“While shepherds wash their socks by night”

I say all of this with tongue firmly planted in my cheek, so I hope I don’t offend anyone out there.  I think it is important to consider what we are singing though before we sing it.  We should also understand that there might be some misconceptions out there and also consider what new comers might be misinterpret from these songs that we sing. 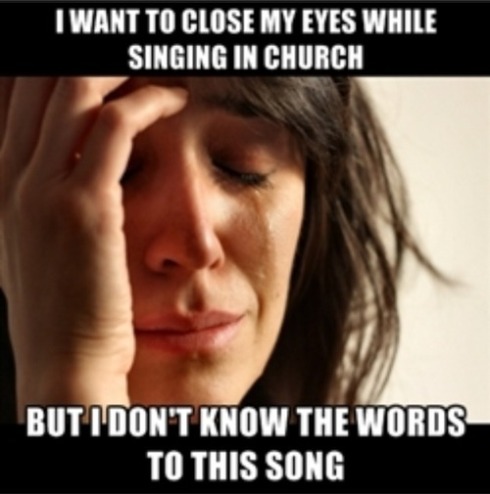