As reported by IHQ news website, source listed below: 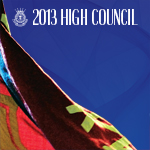 THE second day of the 18th High Council of The Salvation Army commenced with worship led by the Chaplain (Commissioner James Condon). He called on all the African officers and those who had served in Africa to contribute a song, and they reminded members that ‘Every day and every hour, you are faithful, O Lord!’ The Scriptures were shared and moments of prayer followed.

Each nominee for the office of General will be required to answer the same set of questions. In this way the High Council works towards the nomination of candidates for election as the 20th General later in the week – the sole reason for the High Council having been summoned.

Although much has been accomplished in the past two days Commissioner Irene Induruwage (Territorial President of Women’s Ministries, Sri Lanka Territory), attending her second High Council, felt that the council’s work was progressing steadily yet without any sense of pressure. Indeed, she felt that people were open to God’s Spirit and had a sense that what they do today will affect tomorrow.