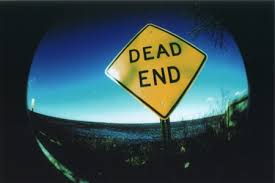 It has happened numerous times.  More times that I would care to admit…but here goes; my wife and I enjoy going on drives.  It doesn’t really matter where we’re going, just to drive and get away from things.  It’s therapeutic.  We will get in the car, I will groan about it, until there is the assurance of a coffee stop along the way first.  Placing the keys in the ignition we will drive sometimes for a couple of hours around country roads, winding lakeside vistas and suburban neighborhoods.  It’s relaxing, but here’s what happens more times than I care to admit…I am a magnet for finding dead end roads.  As we drive and explore new locations and new sights I inevitably turn down side roads a time or two and “bam”  we see the big yellow sign that reads “Dead End”.   So whenever that happens, of course, I must find a driveway or wide patch in the road and turn around because this road isn’t going to take me to where I want to go. 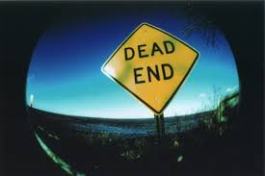 The world is full of ‘Dead End’ roads.  I have learned that a time or two in the span that I have been alive.  Not just the dead end physical black tar kind either, but dead end choices and half constructed pitfalls within the lives and choices of people everywhere.  The world can sometimes look like a cold dark place when we face these dead end alleyways and no one is there to offer us assistance.  There are so many in our world in need to help along the way.  Some are stuck.  Some are confused.  Others are mad at the world and the circumstances they find themselves in.  It isn’t our place to judge, but rather our place to love.

Jesus told His disciples that He was going to His Father’s house to prepare a place for us.  He even told them this one vital truth:  “I am the way and the truth and the life.  No one comes to the Father except through me.” (John 14:6)  If we claim His salvation as our own  and if we are called by Him to serve, then our task as Christ-followers is to go to these dead end roads of life and proclaim ‘The Way’ to all who will hear.  Going to these places requires action on our parts.  We cannot wait for people to come to us, but we must go to them!  It takes real effort.  It takes courage and faith, but who will else will go?

There is a misnomer out there.  It’s really a rationalization of immobility.  This misnomer is this: if I don’t go, someone else will, so I should worry…God will bless me anyway.  Let me ask: what is it that God will bless you with?  Will He bless you because you kept His truths to yourself?  Will He bless you because you warmed that pew on Sunday, week after week, year after year?  Will God bless this kind of lack of effort on your part?  No!

Don’t get me wrong it’s not works then faith, but faith accompanied by works that God will utilize and bless.  In other words, we have to step out of the comforts of our churches, we have to step out of the comforts of our homes and go to those dead end places where others need to hear of ‘The Way’.  Don’t kid yourself that He will send someone else.  He very well may choose someone else if we are inactive, but it will be to our great loss.  Do you remember the parable of the talents?  (Matthew 25:14-30) The Master was going away on a journey and he gave his servants talents of money to keep and invest while he was gone.  Do you remember what happened to the servant who buried his one talent of money?  When it came time to report to the Master upon his return, this servant was called wicked and lazy and was cast out.  That’s pretty harsh isn’t it?   Yet God requires something from us when we accept His gift of salvation.  We are called to invest his salvation in others.

We were once in those dead end places.  We were once lost as well.  It isn’t that we’re placing ourselves above others still stuck in those places but we now have a hope that we must share!  We now have something amazing to proclaim.  We have one in whom salvation and eternity is shared to all who believe!  We have a duty to perform.  We have a responsibility to our Lord and Savior Jesus Christ.  The great commission wasn’t just reserved for Jesus’ disciples it is also commissioned to us to act upon.

If you know ‘The Way’ then get going, get on with it, get out of the pews, get out of the church and go to those dead end streets to proclaim His hope to all!  We will face opposition, resistance, hate and cruelty, but we must meet it with grace, hope, love and peace…the very essence of Jesus living and active through us.  What will you do?

Just a thought for today.