17″After taking the cup, he gave thanks and said, “Take this and divide it among you. 18 For I tell you I will not drink again of the fruit of the vine until the kingdom of God comes.” 19 And he took bread, gave thanks and broke it, and gave it to them, saying, “This is my body given for you; do this in remembrance of me.” 20 In the same way, after the supper he took the cup, saying, “This cup is the new covenant in my blood, which is poured out for you.” (Luke 22:17-20)

Jesus picked up the cup from the table and He instructed His disciples.
He broke the bread next and distributed it among them.  The Passover was given new meaning and understanding in the presence of Jesus in that very moment. 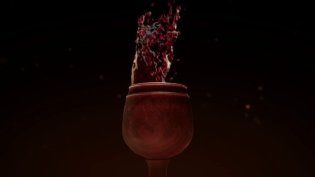 There is something about cups in this passage and the corresponding passage.
The Passover feast has five symbolic cups represented at the table.
Everything done in the Seder meal has meaning and significance.
The first four cups represent God’s deliverance for His people.  (Exodus 6:2-8)
Cup 1 – “I will take you out…”
Cup 2-  “I will deliver you…”
Cup 3- “I will redeem you…”
Cup 4- “I will acquire you…”

But Cup #5 is not to be drunk at the table of Passover.

This cup is not for us.
There is nothing that we can do in our own strength to help in the redemption process.
This cup is also closely linked to God’s wrath on the world and its people.
Jeremiah 25:15 says, “Thus the LORD, the God of Israel, said to me: ‘Take from my hand this cup of the wine of wrath, and make all the nations to whom I send you drink it…”

Still another reference to this cup of wrath comes from Revelation 14:9-10 where it says; ““If anyone worships the beast and its image and receives a mark on his forehead or on his hand, he also will drink the wine of God’s wrath, poured full strength into the cup of his anger”

Jesus went from the Passover table into the garden of Gethsemane.
And as He entered that garden He instructed his disciples to be vigilant, and remain in one place while Jesus went to pray.  Imagine with me for a moment, Jesus kneeling down and he is burdened and deeply grieved.  In that dark garden where shadows dance and warble in the waning light, Jesus is consumed by this profound weight.  He calls out to the Father through gritted teeth and anguish, perhaps a foreboding sign of things that will come to pass, but we are not there yet.  That is the next chapter, and He must endure this realization first.

All the while His disciples cannot remain awake.  The night is velvet, it is deep and their heavy eye lids become weights that are far too heavy to lift.  Jesus wakes them and pleads with them to remain alert.   Then He goes back to His agonizing moment of solitude.  For in these waning hours, even now, His disciples can not support Him.  They have fallen asleep again and are powerless to assist Jesus.  He kneels, with shoulders aching as if He is Atlas with a world hoisted on His back.  He slumps forward and cries to His Father to take this cup from Him.  He knows the time is here.  He understands what needs to be done, what must take place.  But what of this cup?  What of its significance?  Jesus is to drink from this cup.  BUT What is it?

The fifth cup at the table of Passover is called “Elijah’s Cup”.
It is not just of deliverance, but it is the cup of wrath.
God will come with wrath against the wicked and sinful.
This is not the God that we like to think about when we consider who God is.
We want God to be all loving and kind and all knowing and pure…but in that pureness we must understand that sin cannot exist in the presence of the Almighty…and with that startling revelation, we are impure, sinful…we are found wanting.  We are people who are fallen and impure since Adam and Eve broke God’s heart in the garden in their disobedience.  Thus this cup of wrath sits at the Passover table.  It is not drunk.  It resides in the center of the table and the children of the families participating in Passover are to keep watch over it, making sure that it doesn’t move; making sure that it does not spill out its contents.

The Disciples were given a charge to stay alert and observe Jesus.

They were to watch over Him in His hour of greatest need, yet they fell fast asleep (more than once).  Could it be that in our weakness we are also incapable of watching this fifth cup let alone drinking from it?   Indeed we incapable of it, thus Jesus drinks from OUR cup of wrath in our place.  He drains it in the shedding of His blood.  He spills His blood instead of ours.  God’s wrath is redirected at Messiah instead of humanity.  Atonement is achieved through Christ’s blood which covers up our grit and grime having been diluted by sin.  This 5th Cup?  – From wrath to deliverance, this cup is replaced with our ultimate redemption.

Prayer:
Dear Lord, thank you for taking this cup from us.
Thank you for drinking God’s wrath in our place.
I accept your sacrifice on the cross for my sin,
show me what it means to carry my cross every day
through the leading of your spirit in my life.
Amen.