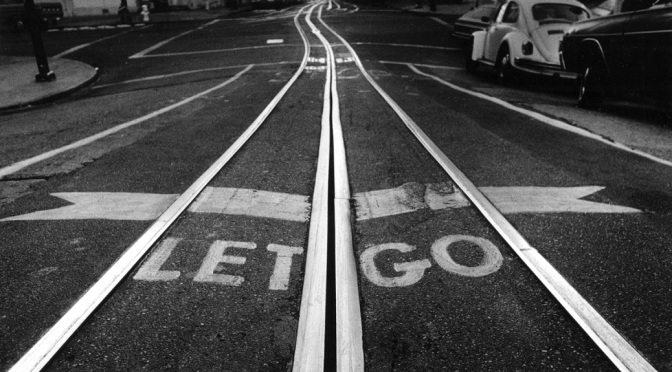 I must confess that I am not very good at this yet.
I still clutch with white knuckles and cling with all my might as if this is what God has called me to do.  Embarrassingly,  I sometimes internally kick and scream when I don’t get my way like a rageful, tantrum seeking kindergartner.  I am no good at letting go.

I have become a professional “holder-on”.
A legacy protector…I have become too good at preserving that which is dead instead of believing in resurrection, a new way and innovation.  (it takes pain and awareness to realize that, like the disciples staring up into the clouds at an ascended Jesus, I too must get on with life and mission)

Words echo in my brain like “Be still and know that I am God…” when all along I am anything but still.  I am a turbulent storm, a freakishly fast flowing river.  I am a cacophony of thought and ceaseless effort.  Could it be that in my many ventures and efforts I have become effortless? (and not the good kind of ‘effortless’)  Ineffective?  Static?  Something about beating a dead horse or the definition of insanity…could this sum up my effortless-efforts?  Is this just evidence of works without faith?  Is this what preserving legacies instead blazing trails looks like?  After all, the disciples didn’t build a monument marking the exact location of Christ’s ascension into heaven; They didn’t remain in that place for the rest of their lives; They didn’t build this ‘holy shrine of ascension’  and preserved His memory… No!  They had to let go of that place.  They were reminded by two white robed figures, who suddenly appeared before them:  “As they were straining their eyes for another glimpse, suddenly two white-robed men were standing there among them, 11 and said, “Men of Galilee, why are you standing here staring at the sky? Jesus has gone away to heaven, and some day, just as he went, he will return!” Acts 1:10-11

…I have to let go…and yet sometimes I imagine myself being that lowly disciples still staring at the clouds despite the words of the alien-angelic figures who visited us.  I am still plodding on into life with the old ways when God has given me a new means of life, a new mission, a new purpose…and I’m still trying to do it in my own strength.  I still need to let go, and yes, let God lead instead of me…how about you?
Do you still have a dead-grip on the reins of your life?  Do you have trouble putting feet to your faith? It’s time stop staring up at an ascended Christ and time to live for Him.

3 thoughts on “The Art of Letting Go…”